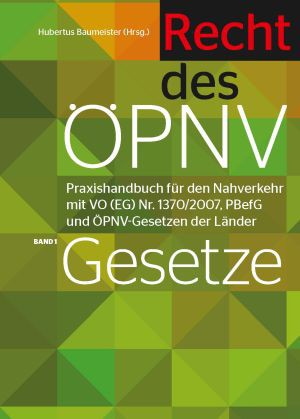 Volume 1 contains the most important national and European regulations.

Volume 2 , part A, provides an up-to-date commentary on Regulation (EC) No 1370/2007, the regionalisation laws of the federation and the federal states and the passenger carriage rules. The authors cross refer to each other in their comments, to produce a unique nationwide reference work on German public transport .

Part B contains a commentary supplemented by presentations of important individual topics from public transport practice.

The volumes and decisions are continually updated and expanded as part of new editions.

The book is a sequel to Public Transport Law. The books are available in user friendly hardcover editions.

A1 The European Common Market in Commercial Passenger Transport

A2 Regionalisation Act of the Federal and Regional Public Transport Laws