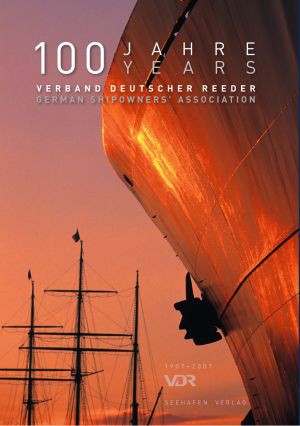 100 years of the German Shipowners’ Associations (VDR) is a look ahead and a look back. This book spans the time since the VDR was founded in 1907.

Initially set up as an association for the regional shipowners' federations to concentrate entrepreneurial interests, the VDR has changed its focus several times in the course of a century.  To make understandable the dramatic upheavals -  the almost complete destruction of the merchant fleet on two occasions, and the reconstruction of the world's third-largest trade fleet -  this book is primarily concerned with the context in which the VDR has supported the German naval shipping industry. The development of the German merchant fleet is a significant theme, but topics such as shipbuilding, security, ports and the environment are also intensively examined.

The book describes an exciting century of German economic history, for the industry, for which globalization was part of everyday business. German shipping companies have used globalization as an opportunity, to build successful enterprises and create thousands of new jobs.